The Full Circle organic wine brand by Fetzer Wines in California had been around since the 1990s. However, no brand recognition, lack of marketing support, distribution problems, and dated packaging led to its demise and eventual deletion from the marketplace. Fetzer asked Tucker Branding to come in with a clean slate as they felt a complete relaunch of the brand was warranted.

Our first task was to establish a consumer profile for the Full Circle brand. We determined the audience as 25-45 year old, educated, well-travelled, and culturally diverse drinkers with an interest in organics: they may not seek organic, but it becomes a tipping point in the decision-making process.

We were asked to update the brand and freshen the packaging of three Full Circle organic wines: Chardonnay, Zinfandel, and a Sauvignon Blanc. The review covered not only the logo and label layout, but also the capsule and shipper art.

The branding and packaging needed to be modern and contemporary, premium, fun and with visual cues hinting at organic. Brand iconography was developed featuring a partial eclipse (as the ‘C’ in Circle) to acknowledge the symbiotic relationship between the moon’s cycle and the natural organic viniculture process. Additionally, an illustration representing the synergetic balance of birds and insects in the vineyards is a core creative element. These design cues ensure the branding relationship is more closely aligned to consumer values.

The outcome was beyond expectation with the brand gaining traction it had previously never enjoyed. Initially slated for the EU and Canadian markets, the brand was extended to the US domestic market where it has since flourished and is realising outstanding market share. 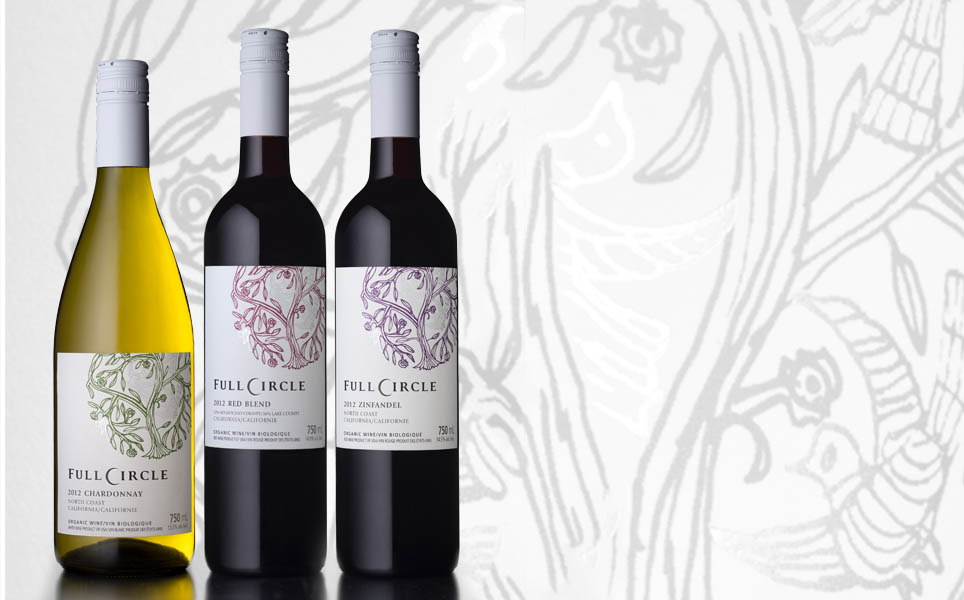